A logic analyzer is useful in electronic development and debugging, especially where fast logic circuits are involved with lots of signals whose relations have to be verified or examined.
A logic analizer is a like a recorder for digital signals. During a certain (small) period of time, the state of a few digital lines can be recorded to a file. An event can be specified to signal the start of the recording, i.e. line 1 toggeling from 0 to 1.
This recording can be viewed afterwards, allowing for zooming and scrolling in the time domain.
In this page a homebuilt logic analizer is presented.

This logic analyzer can:

Run on Win95 and Win98 and ME using non-interrupted burst acquisition.
Run on Win2000 NT XP with interrupted acquisition, using the allowio driver.
Support ECP parallel ports.
Record up to 8 channels.
Use any parallel port.
Sampling at up to 1 million samples per second, depending on your hardware.
Record 32768 samples.
Save and load recordings to/from disk
Use an "Advanced Trigger" sceme. It waits for a channel to remain stable for a given time (Delay), and then it starts sampling after the first change of that channel.

The following graph shows a screenshot of the userinterface. 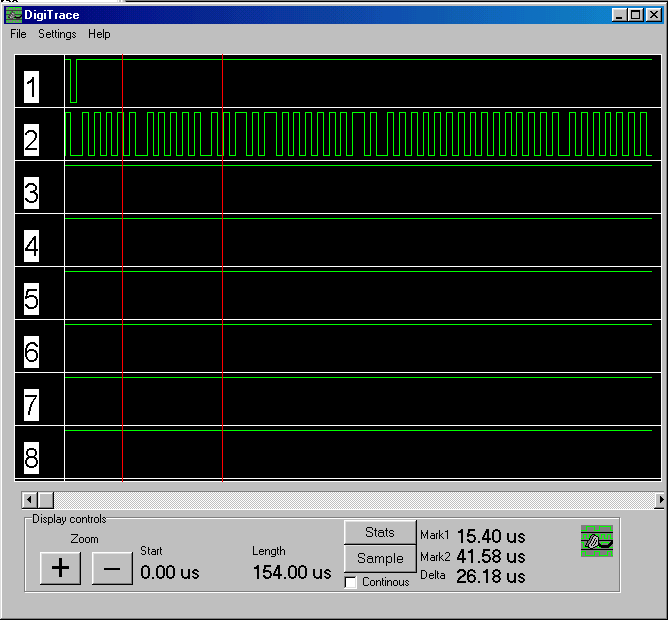 The leftmost label marked "Start" displays the offset time relative to the trigger point of the first sample displayed. The label marked "Length" shows the time represented by a screenful of data. Times are in microseconds.

Next to the labels "1" to "8", a small rectangle is drawn. If it's white, the corresponding line is high. If it is low then the color will be black. The state is refreshed at 10Hz

"Channel" is the channel on which the sampler triggers (0-7).
"Divisor" changes the samplerate. Timing is referenced to the maximum attainable samplerate with your hardware, usually around 1 us. In that case a divisor of 10 means a samplerate of approx. 100KHz. (1 us = 1Mhz, divided by 10 yields 10 us = 100KHz) A calibration is performed at startup to determine this period, and all times shown are referenced to it.

After pressing start, "Delay" is the time the sample function waits for the signal to remain unchanged before triggering.

"Input Port" is the address of your printer port.

Granularity tells you how much time a sample represents.

Here's the old version. It contains the following: Extract it to a directory of choice. Find out at which address the parallel printer port is located. Usually it's 0x378.

The new version comes as a setupper and contains some more files: Run the setupper it will guide you through the process.

An upgrade is available: Digitrace_0_0_0_9.zip
It features:
It's built using Borland Codebuilder 6.0, and it might require additional libraries. Please report any problems

If you like this program, please consider donating a small fee. It's easy with the following link:

This article was written by Arian van Dorsten jwasys@xs4all.nl

The most recent version can be found on: http://www.xs4all.nl/~jwasys